Yinka Shonibare CBE was born in London and raised in Lagos. Shonibare returned to London in 1979 where he studied at Byam Shaw School of Art (now Central Saint Martins) before obtaining his MFA from Goldsmiths College. Shonibare was awarded Member of the Most Excellent Order of the British Empireâ€™ (MBE) in 2004. He was received an Honorary Doctorate (Fine Artist) of the Royal College of Art in 2010 and was awarded a CBE in 2019.

Shonibareâ€™s work is a conversation on colonialism, race, authenticity, class, disability and beauty – but not without humour.

Shonibare is a multi-disciplinary artist, allowing the form of his creations to be dictated by the idea as a practising artist for more than three decades Shonibare constantly reimagines his process across sculpture, painting, photography and film, with his signature â€˜Africanâ€™ Batik fabric as the axis of his practice. It is the ironic distinction of the Indonesian-inspired, Dutch-produced, exported fabric as a symbol of â€˜Africanâ€™ identity and independence, that sparked Shonibareâ€™s artistic oeuvre.

Shonibare stepped into the international spotlight when Okwui Enwezor commissioned work for Documenta 11 (Kassel, 2002) where he exhibited the impressive Gallantry and Criminal ConversationÂ sculptural installation. In 2008 Shonibareâ€™s mid-career survey travelled from the Museum of Contemporary Art in Sydney to numerous institutions worldwide including the Brooklyn Museum in New York. Shonibare exhibits extensively throughout the world. Shonibareâ€™s most recent exhibition Prejudice at Home; a Parlour, a Library and a RoomÂ at James Cohan Gallery (New York) in 2017.

In 2010, Shonibare was granted the Fourth Plinth Commission in Trafalgar Square (London) and has received public commissions from The Royal Opera House (London), British Council (UK/ Nigeria) and the Smithsonian Institute (Washington D.C) amongst others.

Yinka Shonibare CBE has been featured in Zeitz MOCAA’s inaugural exhibition, All things being equal… (2017-19) as well as the Afrofuturist exhibition, Still here tomorrow to high five you yesterday… (2019) 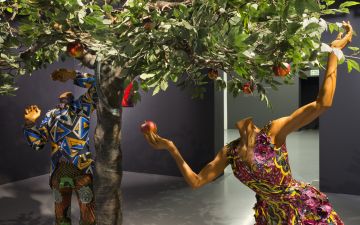 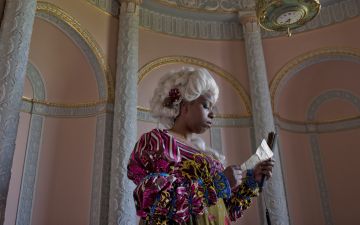