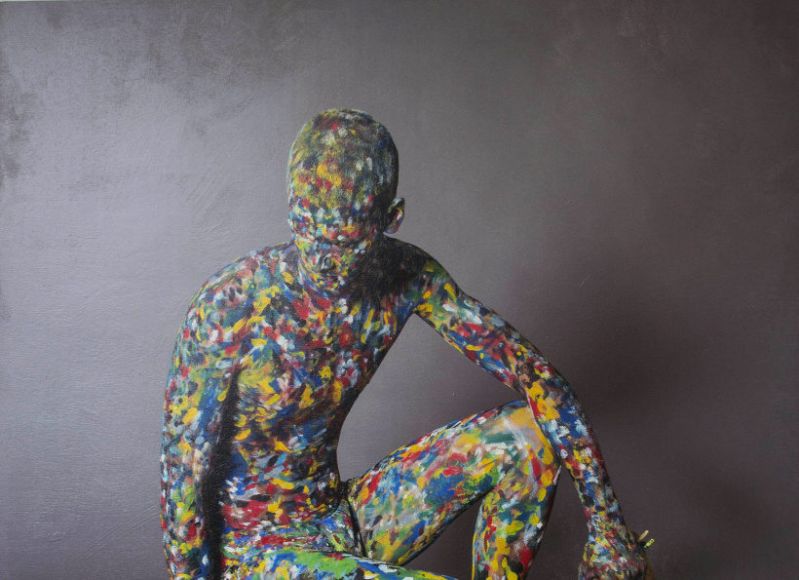 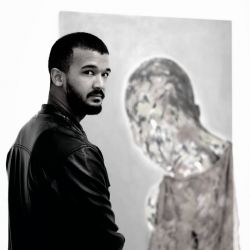 RoryÂ Emmett lives and works in Cape Town and completed his BAFA at Michaelis School of Fine Art (UCT) in 2014. He majored in painting, and in his final year was awarded the Judy Steinberg Painting Prize.Â Emmett was the 2014 recipient of the Hoosein Mohamed Award and the Director and Staff Special Prize, in his final year.

I am concerned with the language and alchemy of painting. Through my work, I attempt to interrogate colour, and itâ€™s various ideological connotations, as a medium in painting as well as a racial construct.

In the work,Â I Feel Most Coloured When I Am Thrown Up Against A Sharp Black And White Background (2018) EmmettÂ attempts to grapple with the act of painting in its relation to constructions of space, knowledge, language and identity, as well as labour and itsâ€™ commodification (particularly within the context of Cape Town). By creating aÂ character calledÂ The Cape Colourman â€“ or ColourmanÂ for short, Emmett creates a figure that takes on the idiom of â€˜colouredâ€™ identity in attempts to become a heroic avatar. Colourman becomes a play on the term â€˜coloured manâ€™ – thus questioning certain prescribed assumptions and notions of identity as a static disposition. The Cape Colourmanâ€™s identity is fluid, not fixed. His racial ambiguity refers to the term â€˜colouredâ€™ used throughout South Africa to refer to native South Africans of diverse racial origins. Colourman occupies perpetual greyness, the grey area of liminality and limitless possibilities. The figure is used in performative ways to simultaneously create, dismantle and deconstruct spaces that separate people in order to interrogate idealistic notions of â€˜rainbowismâ€™. The constructed figureâ€™s â€˜skinâ€™ is constantly shifting â€“ never the same at any given time â€“ highlighting the complexities of the surface and re-imagine his appearance in constant flux.

This work seeks to further interrogate the privilege that makes one personâ€™s work worth more than another personâ€™s work or labour. â€œI Feel Most Colouredâ€¦â€ (2018), a site-specific performance materializes in the act of writing/painting a wall at Zietz MOCAA by his constructed avatar character The Cape Colourman. The phrase is a reference to a work by artist Glenn Ligon, who screen prints the line,Â originally written in author Zora Neale Hurston’s “How It Feels To Be Colored Me” (1928) repeatedly, even to the point of abstraction.

During the performance, Colourman writes the phrase â€œI Feel Most Coloured…â€ with charcoal (black) and chalk (white), repeatedly on a painted background. The character then proceeds to reduce stones painted in the primary colours of yellow, red and blue to a fine powder form. In mixing the powdered stones with water to achieve a chromatic grey â€˜paintâ€™. Â Â In this process, Emmet uses ColourednessÂ as a medium to make sense of systems of classification, and power as well as to deconstruct them.

His work forms part of one of the University of Cape Town’s permanent collections, at the Centre for Curating the Archive (CAA), as well as a number of private and corporate collections. Emmett was a Top 5 Sasol New Signatures Merit Award winner for 2015 as well as an SPI Portrait Award 2015 finalist.

Rory Emmett’s work,Â I Feel Most Coloured When I Am Thrown Up Against A Sharp Black And White Background (2018) is part of the Zeitz MOCAA exhibition, The Main Complaint (2018 – 2019).