Kenyan-born artist, Mũchiri Njenga attended school in the highlands of Limuru before teaching himself art and computer animation. His first job was as an animator for a children’s TV show where he produced 52 episodes of animated content. He later worked as a consultant animator and visual effects artist at local productions houses and advertising agencies before starting his film and animation company, Studio Ang in 2008.

Besides directing and producing films, Mũchiri created visual art, installations and photography. His work revolves around African spirituality in relation to modern contemporary cultures and technologies. Concerning African history, Njenga believes that there are no myths, only distorted half-remembered truths. His background in animation has influenced his passion for filmmaking and fed his idiosyncratic style of mixing African traditional aesthetics with modern storytelling techniques using film, installation and photography.

Kichwateli project investigates the role of seers in a dystopian African society. It interrogates the role of spirituality in a trans-humanistic world where people are debating whether their soul still exists. This work challenges the older generation in Africa to allow the younger ones to take control of their spiritual destiny while guiding them in tracing their ancient roots. The project reinforces the notion that they who control the present, control the past. And they who control the past, control the future. 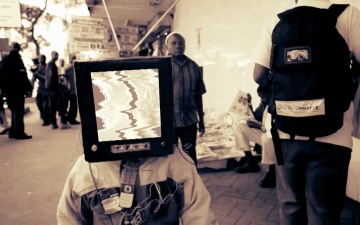