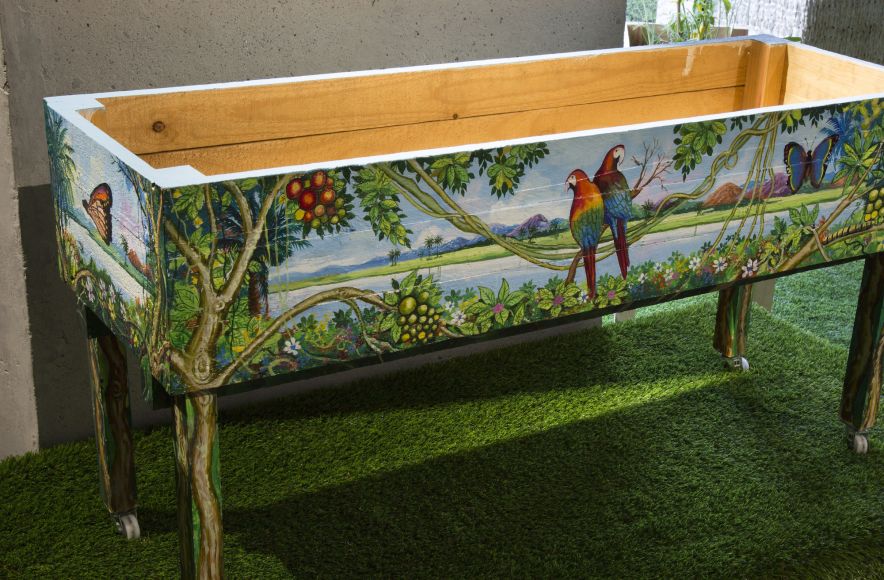 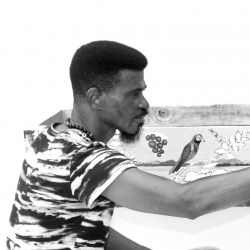 Monsengo Shula, who lives and works in the sprawling urban capital of the Democratic Republic of Congo, was born in 1959, in Nioki.Â

Shula started his artist career at the age of 15 as his cousin’s assistant, the well known Moke, the godfather of the “popular painting” and a colourist master. Shula’s narrative paintings directly stemmed from everyday life, are critical, condemn political unfairness, bring awareness and raise population.

The themes associated with his recent paintings bring a new perspective to global problems such as global warming, international policy and the relationship of mankind with technology.

Shula distinguishes himself from the other popular painters such as Moke, ChÃ©ri Samba, ChÃ©ri ChÃ©rin, with his characteristic combination of colour which unreality.While

Shulaâ€™s art is occasionally otherworldly, its roots are of course very much downâ€‘toâ€‘earth and African. He is an incurable optimist. â€œSooner or later, the world will change, and sooner or later, everyone will have to talk about Africa. Itâ€™s not just artistic, itâ€™s political. Weâ€™re the biggest continent, weâ€™re the crossroads of the whole world. We have to continue to emerge onto the world stage, and we have everything we need. Thereâ€™s gold, copper, oil, diamonds, everything we need in terms of natural resources.â€Â

Shula contributed what is now one of his most famous works, entitled â€œAta ndele mokili ekobalukaâ€, depicting Afronauts in brightly coloured spacesuits floating around a satellite, atop which sits a traditional African figurine. The title of this emblematic work translates into English as â€œSooner or later, the world will changeâ€.Â

Shula’s work featured in the Zeitz MOCAA exhibition, Growbox Art Project depicts a tropical paradise and suggests a homage to the Garden of Eden. Shula’s vision of Africa is lush and filled with immeasurable vegetation. There is a utopian desire for nature’s abundance and pristine land. Shula is concerned with the issue of deforestation. He created his Growbox to be a symbolic form of reforestation. In Kinshasa, the capital city of the Democratic Republic of Congo, there is an important agricultural site called Kingabwa, reserved for mamans maraÃ®chÃ©res known as the market gardening moms of this part of the city. They provide fresh produce and vegetables to the city’s inhabitants as a constant source of the food supply. Yet, Joseph Kokonyangi, Minister of Urban Planning and Habitat, attempted to award 500 national deputies in government the women’s garden allotments leading to protest demonstrations. The blatant greed and corruption of his nation’s land, its resources and its people was an impetus for Shula to imagine a time and place where nature was free – unspoilt by civilisation.