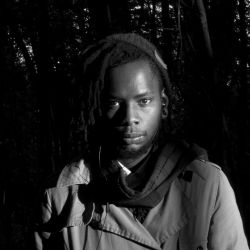 Mack Magagane was born in Soweto, Johannesburg in 1990. In 2010 he was awarded the Tierney Fellowship, and attended the Market Photo Workshop under the mentorship of practitioner and academic Jo Ratcliffe.

Introduced to photography by his sister in 2008, Magaganeâ€™s first project Light Hours (2009), displays an early interest in the construction of the built environment and its subsequent effect on the psyche of South Africaâ€™s urban populous. â€œIâ€™m fascinated by the rapid infrastructural, social, economical and political change within Johannesburg,â€ he told The Leica Camera Blog, â€œ[â€¦] I try then to find the in-between[â€¦]â€

In his work the process of inhabiting the city becomes paramount. The act of getting to know oneâ€™s environment, walking through the streets at night, setting yourself up for a potential photograph, all of these elements play out and help to create a portrait of a people and place that is both real and imagined.

This approach to both photographic process and subject is perhaps best encapsulated in the catalogue for his 2012 exhibitionÂ  â€¦in this city, held at ROOM gallery, Johannesburg in 2012, a product of his time spent at Market Photo Workshop: â€œâ€¦ in this city seeks the incidental: an illuminated figure in a window, a car passing on a dark road, momentary encounters in transitory spaces. These intimate observations are the stuff of ordinary everyday life as it unfolds in a city that is constantly reforming and redefining itself. But in these isolated vignettes, fragments of untold stories or dreams even, the usual narratives of Johannesburg, conjure up an elusive city, one that is as much imaginary as it may be real.â€

In 2013 Magagane won the Centre Photographiqie dâ€™Ile-de-France Residency in Paris, as part of the French-South African season, and that same year was included in Mail & Guardianâ€™s 200 Young South Africans Induction. In 2011 he was awarded the ACT ImpACT Award for Visual Arts.