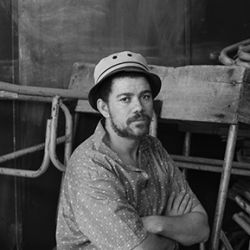 Kemang Wa Lehulere was born in Cape Town, South Africa. He has a BA Fine Arts degree from the University of the Witwatersrand (2011).

Wa Lehulereâ€™s artistic practice reacts to the historical legacy of South Africa, using performative acts with objects and materials familiar to South African society, to carve, dig, break, erase or reconstitute. Objects like wooden school desks, ceramic sculptures of Alsatian dogs and blackboards are incorporated into various installations and used as symbols of both an educational system within the apartheid regime and its performance within a contemporary democratic society.

The objects transmute between a familiar object from childhood into more pointed questions or concerns that challenge our assumptions about the histories and social structures that shape the world around us.

A presentation of Kemang Wa Lehulereâ€™s installation I cut my skin to liberate the splinter was on show at Tate Modern, London. Previous solo exhibitions have taken place at Pasquart Art Centre, Biel (2018); MAXXI, Rome (2017); Deutsche Bank KunstHalle (2017); the Art Institute of Chicago (2016); Gasworks, London (2015); Lombard Freid Projects, New York (2013); the Goethe-Institut, Johannesburg (2011), and the Association of Visual Arts in Cape Town (2009), in addition to Stevenson (2018; 2016; 2015; 2012) and Marian Goodman Gallery (2018). Notable group exhibitions include May You Live in Interesting Times, at the 58th Venice Biennale (2019); Leaving the Echo Chamber, the 14th Sharjah Biennale (2019); Hacer Noche, Oxaca, Mexico (2018); Sculpture at the Institute of Contemporary Art Indian Ocean (2018); O TriÃ¢ngulo AtlÃ¢ntico, 11th Mercosul Biennial(2018); The South African Pavilion without Walls, Performa 17, New York (2017); Art/Afrique, le nouvel atelier at Fondation Louis Vuitton, Paris (2017); African Odysseys at Le Brass Cultural Centre of Forest, Belgium (2015); the 8th Berlin Biennale (2014); Public Intimacy: Art and Other Ordinary Acts in South Africa at the Yerba Buena Center for the Arts, San Francisco (2014); The Ungovernables, the second triennial exhibition of the New Museum in New York (2012); A Terrible Beauty is Born, the 11th Lyon Biennale, France (2011), and When Your Lips Are My Ears, Our Bodies Become Radios at the Kunsthalle Bern and Zentrum Paul Klee in Bern, Switzerland (2010).

Wa Lehulere was the winner of the inaugural Spier Contemporary Award in 2007, the MTN New Contemporaries Award in 2010, and the Tollman Award for the Visual Arts in 2012; he was one of two young artists awarded the 15th Baloise Art Prize at Art Basel in 2013, won the first International Tiberius Art Award Dresden in 2014 and was the Standard Bank Young Artist for Visual Arts in 2015. In 2017 he was Deutsche Bankâ€™s Artist of the Year, the recipient of the fourth Malcolm McLaren Award and was shortlisted for the Future Generation Art Prize.

Wa Lehulere was a co-founder of the Gugulective (2006), an artist-led collective based in Cape Town, and a founding member of the Center for Historical Reenactments in Johannesburg.

In 2018, Wa Lehulere closed down his studio space in Maitland, Cape Town.