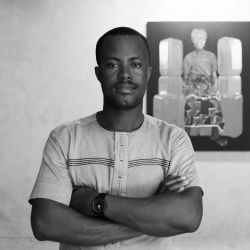 Jeremiah Quarshie was born in Accra, Ghana. He lives and works in Lagos, Nigeria. Quarshie obtained a (B.F.A) from the Kwame Nkrumah University of Science and Technology, KNUST, Kumasi (2007).

Using a hyper realistic painting style, Quarshie examines the notion of constructed imagery, to investigate the nature of art itself.

Using the â€˜politics of paintingâ€™ and itsâ€™ traditional formalistic concerns as metaphors, he displays an acute social awareness in examining the connection between people who have previously been historically and culturally divided. These divisions have occurred because of social, economic or geographical conditions that have manifested on the African continent. Through his portraiture, he documents the lives of people in fabricated and genuine roles, using his own friends or so- called â€˜ordinary womenâ€™ who he scouted for his painting subjects. Quarshieâ€™s over-arching thematic concerns pertain to concepts of â€˜hope against failing political conditions.â€™

Quarshie, as a Ghanian artist, expresses his concerns regarding the notion of decay, specifically pertaining to water and its flow throughout the city of Accra. His exhibition titled Yellow is the Colour of Water and Other Propositions of Positive Impossibilities, uses the ubiquitous yellow â€œKufuorâ€ gallons to symbolize the politics of water. In Quarshieâ€™s painting, women pose with tableauxâ€™s erected from yellow gallons, where their negotiation of the space, serves as a metaphor for approaching the political failures of Ghana from alternative perspectives.

Quarshie, began exhibiting in 2007, participating in the exhibition, Ghana at 50, Students Portraits Exhibition, The National Museum of Ghana, Accra and the Pan African Festival Exhibition of Art and Craft, Cape Coast. He went on to exhibit internationally at the Time, Trade and Travel, Stedelijk Museum Bureau Amsterdam (SMBA), Amsterdam (2012) and Gallery 1957 at 1:54 Contemporary African Art Fair, New York (2017). Quarshie has also participated in a number of shows in his hometown and place of residence including: The Ghana-project, Global Art, Local View, Goethe Institut, Accra (2012), Kaleidoscope, La Villa Boutique, Accra (2013), Muses, Goethe Institut, Accra (2013) and The Gown Must Go To Town, Science and Technology Musuem, Ghana.

His work forms part of numerous local and international collections such as, The Harn Museum of Art, Florida, The Seth Dei Foundation, Accra and The World Bank Collection, Washington D.C. He has also recently completed a residency at the African Artists’ Foundation (AAF), Lagos (2017).

Profile image courtesy of the artist and Gallery1957

Auntie Dedei, Yellow is the Colour of Water