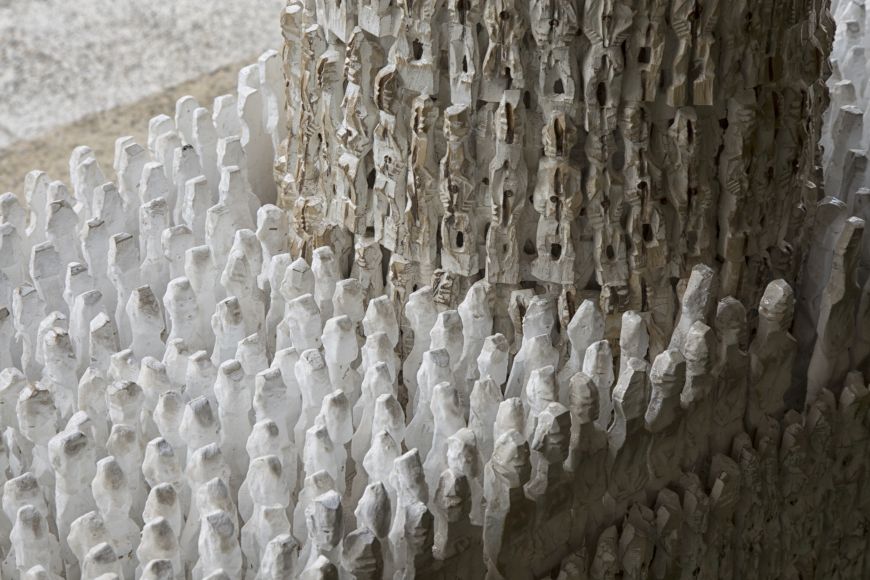 ZinkpÃ¨ was born in Cotonou, the capital of Benin andÂ is one of the most recognisable contemporary artists to emerge from Benin.

Artistically, ZinkpÃ¨ is just as atypical. His paintings have a very distinctive and instantly recognisable style, with bright colours, bold lines, human forms, and a whirl of action on the canvas.

His work is influenced by Benin’s rich history and his immediate African surroundings. ZinkpÃ¨’s paintings have a surrealist quality – loose figures battle and swim on the canvas. Nurturing fertile women often appear in ZinkpÃ¨’s work recalling themes of desire and motherhood. He uses a mixture of oil, acrylics and found objects on his canvas and leaves large areas of empty space. ZinkpÃ¨’s paintings can be jarring and unsettling, informed by animism, religion and his own internal struggles. ZinkpÃ¨’s sculptures are no less arresting. Many of them consist of assemblages of carved woodedÂ IbejiÂ dolls that engage the Yoruba concept of twinship.

ZinkpÃ¨ is a man possessed. Possessed by his art, ideas, and beliefs. His art is a fluent mix of stylistic influences from just about every area, a product of Beninâ€™s history. His ideas are expressed through motifs that neatly trace the various powers that fought for control of the continent â€“ both religious and political. His beliefs are the solid footing for his art, which is a pragmatic medium for the transmission of his message.Â

Dominique ZinkpÃ¨ was awarded the Prix Jeune Talent Africa in 1993 and won the Prix Umeoa at the 2002 Dakar Biennale.

Dominique ZinkpÃ¨ is featured in the Zeitz MOCAA exhibition, Growbox Art Project supported by African Artists for Development (AAD). The piece he created is a monumental cross atop the GrowBox itself. It has an oblique slant to the top of the vertical and a circular cross-section. The cross is entirely covered with his totem Ibedji, and more Ibedji stand around the foot of the cross, along the perimeter of the GrowBox. ZinkpÃ¨ explains his choice simply. â€œItâ€™s for growing things. I decided to grow a cross.â€ He elaborates. â€œItâ€™s about being human, what makes us human. We are all condemned. We are human beings. We are born, we live, we suffer. We evolve, but we experience pain. We all have a cross to bear.â€Â