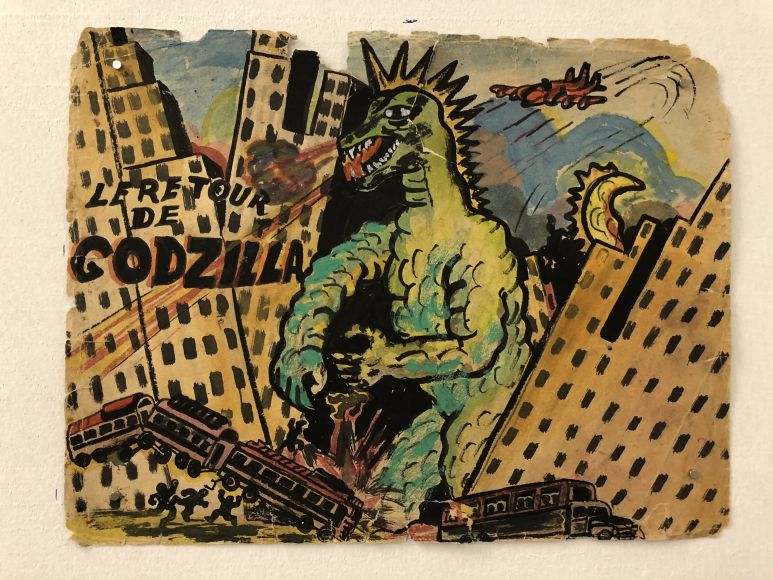 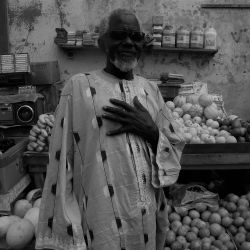 Senegalese-born artist, theatre actor and singer, Ndiaye Abdoulaye lives and works in ThiÃ¨s, Senegal.Â He studied painting at the School of Arts in Dakar in 1962. Attracted by the drawing, he began to copy the posters of the films he saw at the cinema Le Palace, ThiÃ¨s, from the late 1940s.

All my life is summed up in my drawings.

In 1964, he founded the orchestra Thiossane Club, after playing in several groups, such as the Royal Band in Thies and the National Orchestra of Senegal. Although his songs were on the radio in the late 1950s, which earned him some notoriety, it was only at the age of 74 that he released his first album titled, Ablaye Ndiaye Thiossane.

Abdoulaye is inspired by many things, including the transmission of his griot culture, inspired by tales that his mother read to him every night and the oriental music of Farid El-Atrache through Tino Rossi, discovered in 1953 thanks to his father, jazz and Afro-Cuban music.

In 1964, he composed Tallen Lampi, one of the sixties hymns of Senegal, which he performed on stage at the opening of the Negro Arts Festival in Dakar in 1966. Â This festival, which has been held in Dakar since 1966, is organized on the initiative of Presence Africaine magazine and the African Society of Culture, under the magisterium of LÃ©opold SÃ©dar Senghor. It is an unprecedented event in the cultural history of the African continent. Personalities from all walks of life participate, including Â AndrÃ© Malraux, AimÃ© CÃ©saire, Duke Ellington, JosÃ©phine Baker, Mahalia Jackson, African Ballets, OK Jazz. All disciplines are represented: visual arts, literature, music, dance, cinema.

The Dakar School is honoured. This movement, symbol of the artistic revival born in Senegal at the dawn of independence, encouraged by President LÃ©opold SÃ©dar Senghor as part of the negritude, is implemented by personalities such as Papa Ibra Tall and Iba N’Diaye, painters that Abdoulaye particularly admires.

President Senghor appreciates Abdoulaye’s talent. On a presidential invitation, he then joined the ThiÃ¨s tapestry factory, without persevering in a musical way. He practices the trade of painter-cartonnier. His works are reproduced in tapestries. One of them was displayed at the UN headquarters. His painting is famous in Senegal and has been the subject of some exhibitions. Talented but not very opportunistic, Abdoulaye gradually disappears from the official circuits while continuing to paint and draw movie posters, which form an imaginary world with sublimated candor.

His great passion is drawing, which he initiates himself by copying the posters of films programmed in the cinemas of his city. His father, Lamine Ndiaye, amateur painter, has always encouraged him to lead an artistic career, which is rare in Senegal in the 1950s. Ablaye Abdoulaye made his first poster in 1949, at the age of 14. He still remembers it was Alfred L. Werker’s film, Walking the Night (1948). This insatiable curiosity is reflected in his love of cinema, which allows him to open up to cultures around the world, without really leaving ThiÃ¨s.

At this time, few African films are screened. Even films like Liberty 1, by Yves Campi (1962), The Bronze Bracelet of Tidiane Aw (1974) or the films of Ousmane SembÃ¨ne, major director of contemporary Africa, known for his biases on issues political and social, are very poorly disseminated. French or Japanese films pass at the Palace and the Agora, while the Rex broadcasts mainly Arab, Indian or American films. Abdoulaye, for example, draws the whole Tarzan series with Johnny Weissmuller: Tarzan Escapes,Â Tarzan finds a son, Tarzan’s treasure, Tarzan and the leopard-woman.

Through his drawings, Abdoulaye wants to tell the story of these films, which he has almost all seen, and which fascinate him. He likes movie posters, magazines like Cine Revue. He does not seek to constitute a collection, but to draw what he sees is for him a necessity. Over the decades, he has been drawing more than 2,000 posters of cosmopolitan films. After having lived for a long time in Dakar, Abdoulaye returned to ThiÃ¨s in 1992, where he devoted himself in his studio to his first love of poster artist and passionate illustrator.

Abdoulaye also maintains a very emotional relationship with cinemas, which he considers sacred places. When he was drawing a poster in the street, in front of the cinema, and that too many people were watching him, the director of the cinema made him enter the hall and then the room, so that he could be quieter and work in peace. He could then watch the movie. All these cinemas were destroyed in the 1980s and 1990s, with the exception of the Aiglon. The diffusion of films on DVD and on television has overtaken the screenings in the cinema, the films have become more violent and more commercial, the magic has vanished and the motivation of Ablaye Thiossane has dried up.