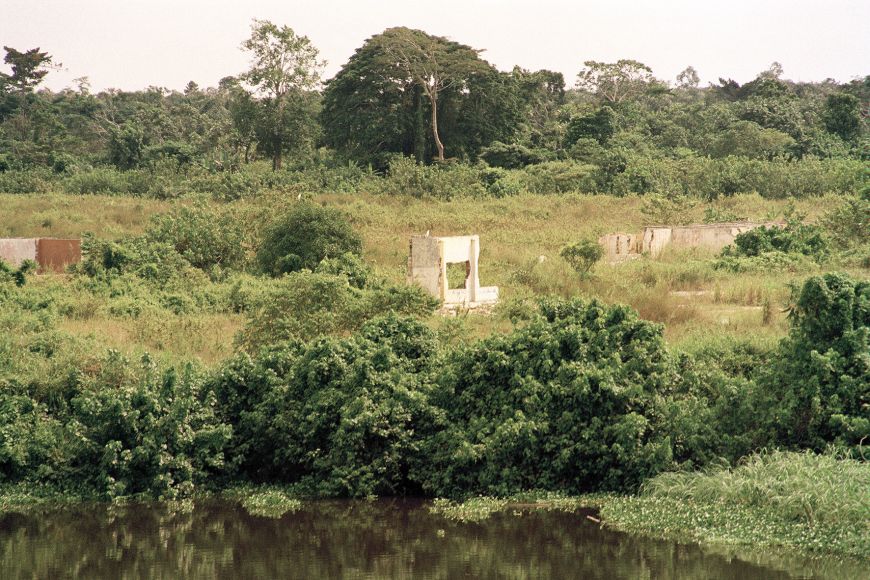 Nkanga has been the recipient of numerous awards, most recently the inaugural Lise Wilhelmsen Art Award (2019) from the Norwegian Henie Onstad Art Centre, and the Sharjah Art Foundation Prize (2019) in the United Arab Emirates.

Acts at the Crossroads is a significant survey exhibition, and the first museum exhibition on the African continent of the artistâ€™s work. It includes works from the last two decades – a multidisciplinary practice that considers humanityâ€™s connection to the environment in complex ways.

Rather than present us with an instructive method of documentation and observation, Nkanga grounds her work in a familiarity of encounter between viewer, artist, and object and asks us to consider the earth as an extension of the physical human body, to understand that it too is undeniably alive.

â€œExploring environmental damage and the politics of land, her practice becomes a conduit, a voice for these raw, organic materials. Acts of labour, mining, commodification and trade have an impact on the earth that is also mirrored in the ways we treat the body,â€ says Precious Mhone, Curatorial Assistant.

Acts at the Crossroads explores a host of potential outcomes that present themselves at points of convergence. An agreement or understanding between two parties, a merger of ideas, thoughts, belief systems, cultures, histories and narratives. Connections become created, bonds are formed and solidified or broken. Differing ideologies are confronted, things are torn apart or brought together.

The exhibition invites viewers to connect with themselves and each other at these points of awareness and reflexivity, through a range of media including drawing, painting, photography and video works, geological matter and decayed minerals.

â€œI thought it was interesting to be able to think about these ideas, especially in South Africa, which for me has been a kind of crossroads. Or the acts or pacts that have been very much related to land and landscape,â€ explains Nkanga. â€œSo, when I was really thinking about the title, I wanted to allude to entering into the realm of matter and material and its effect on different groups of people.â€

â€œI am thrilled â€“ and honoured â€“ to host Otobong at our museum. I have known and worked closely with her for many years and celebrated her success each step of the way, says Koyo Kouoh, Zeitz MOCAA Executive Director and Chief Curator.

â€œHer far-reaching practice echoes a globalisation that suggests we bear a true and honest connection with each other that transcends the notion of borders and emphasises the shared human condition. She gives voice to a need to reconnect and rethink our relationship to the earth, both personally and globally â€“ a message that is never more pertinent than right now.â€

Nkangaâ€™s most recent solo exhibitions include From Where I Stand at Tate St. Ives (2019), A Lapse, a Stain, a Fall at ar/ge kunst, Bolzano (2018), and To Dig a Hole that Collapses Again at MCA Museum of Contemporary Art, Chicago (2018).

Otobong Nkanga (b. 1974, Kano, Nigeria) began studying art at the Obafemi Awolowo University in Ile-Ife, Nigeria and later graduated from the Ecole Nationale SupÃ©rieure des Beaux-Arts in Paris, France. She attended the residency programme at the Rijksakademie Van Beeldende Kunsten in Amsterdam, Netherlands and in 2008 obtained a Masters in the Performing Arts at Dasarts, Amsterdam, Netherlands. She currently lives and works in Antwerp, Belgium.

Nkanga explores the politics of land and its relationship to the body. Unpacking histories of land ownership and migrations, Nkanga brings to light the memories and historical impacts provoked by humans and nature. The artistâ€™s research makes connections to all of the various components that make up our environment, observing the inherent complexities of resources like soil and earth and their potential values in order to provoke narratives and stories about the land.

Her most recent solo exhibitions include From Where I Stand, Tate St. Ives (2019), A Lapse, a Stain, a Fall, ar/ge kunst, Bolzano (2018); To Dig a Hole that Collapses Again, MCA Museum of Contemporary Art, Chicago (2018); Wetin You Go Do?, The Tanks at Tate Modern, Blavatnik Building, London (2017); The Encounter That Took a Part of Me, Kunsthal Aarhus, Aarhus (2017); The Encounter That Took a Part of Me, Nottingham Contemporary, Nottingham (2016); Diaoptasia, Tate Modern, London (2015); Comot Your Eyes Make I Borrow You Mine, Kadist Art Foundation FR, Paris (2015); Crumbling Through Powdery Air, Portikus, Frankfurt (2015).

Nkangaâ€™s work has been the recipient of multiple awards, including the inaugural Lise Wilhelmsen Art Award (2019); the Sharjah Art Foundation Prize (2019); the Belgian Art Prize (2017); and the 8th Yanghyun Prize, Korea, (2015).

Zeitz Museum of Contemporary Art Africa (Zeitz MOCAA) is a public, not-for-profit institution that exhibits, collects, preserves and researches contemporary art from Africa and its diaspora; conceives and hosts international exhibitions; develops supporting educational, discursive and enrichment progammes; encourages intercultural understanding; and strives for access for all.
The museumâ€™s galleries are dedicated to featured exhibitions with a dedicated space for the permanent collection. The institution also includes the Centre for Art Education, the Centre for the Moving Image, and a dedicated project space for emerging artists.

+27 796956201
We use cookies on our website to give you the most relevant experience by remembering your preferences and repeat visits. By clicking “Accept All”, you consent to the use of ALL the cookies. However, you may visit "Cookie Settings" to provide a controlled consent.
Cookie SettingsAccept All
Manage consent