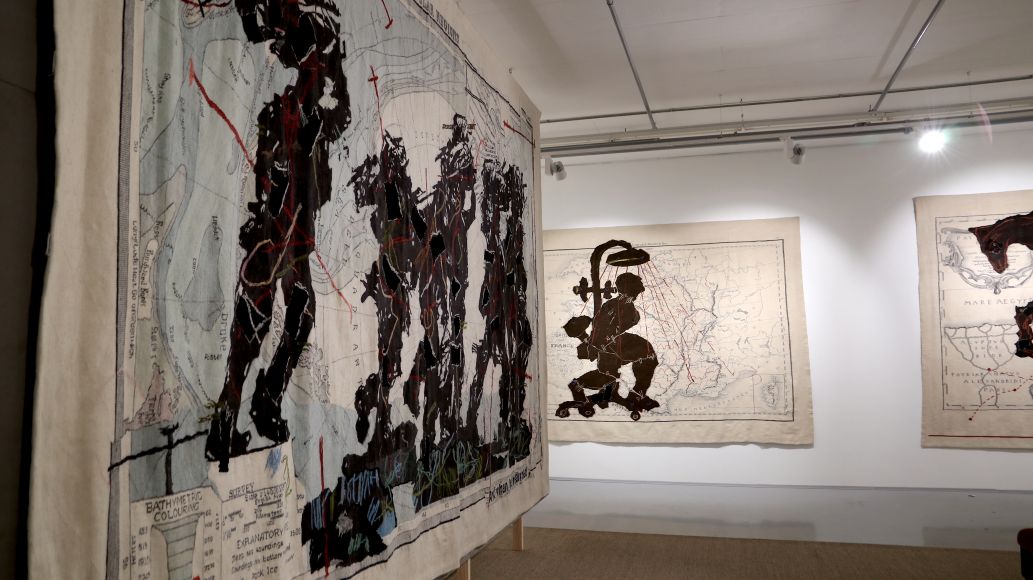 Cape Town, 25 August 2019: The largest ever survey exhibition by internationally acclaimed artist William Kentridge opens in Cape Town in August. This major exhibition will be hosted simultaneously in two parts by the Zeitz Museum of Contemporary Art Africa (Zeitz MOCAA), which will host his multi-media works; and at Norval Foundation, which will present his sculptural works.

Why Should I Hesitate: Putting Drawings to Work, hosted at Zeitz MOCAA, will stage a large oeuvre of Kentridge’s 40-year career, showing works including charcoal drawings, woodcut prints, stop-frame animation, tapestries, installation and video. In addition, the exhibition will pay particular attention to the role of studio practice in Kentridge’s career.

“When conceptualizing this exhibition, we wanted to do more than simply attempt to condense many of Kentridge’s projects from his illustrious career into one space. It was vital to unpack Kentridge and reveal more of his processes and how two-dimensional forms assume life. We also wanted to offer a sort of ‘backstage’ view of the artist on his journeys and his experimentations, and sometimes at his most uncertain and vulnerable,” explains Azu Nwagbogu, curator of the exhibition.

The exhibition title, Why Should I Hesitate, is taken from the artist’s recent opera, The Head and the Load (2018), which explores some of the paradoxes of Africa’s involvement in the First World War. This question was first posed by an African soldier who had a difficult choice: accept conscription – leaving behind the security of his home, to risk his life in a war of which he had little knowledge – or reject conscription and face certain persecution. Read in the context of Kentridge’s studio practice, Why Should I Hesitate is therefore a question that stresses the importance of process over procedure or product. It is an attempt to draw out the artist’s work from the uncertainties of legend, so it can be understood within the context of our ever-changing cultural climate: an exercise that resists inertia but is necessarily framed by doubt.

“While Kentridge remains dedicated to a South African narrative, his projects pose humanist questions of other such similar historical failures and other utopic possibilities for success. In this way, the exhibition may be viewed as a historiographic reading of the world over the last century,” adds Tammy Langtry, curator of the exhibition.

Due to the breadth of the artist’s creative practice, the exhibition spans five independent spaces throughout Zeitz MOCAA – Level 3, Level 1, Centre for the Moving Image, BMW Atrium, and a nighttime projection in the Track Shed.

It will be supported by a number of public programmes and events, including a symposium on 27 October that will bring together leading figures in the art world to extend the important dialogue and thematic concerns emanating from Kentridge’s work.

The exhibition will also be supported by an exhibition catalogue/ artist book, entitled Why Should I Hesitate: Putting Drawings to Work, which will be on sale at the Zeitz MOCAA shop from 25 August 2019.

Notes to editors: details on works and the exhibition spaces

Level 3 – The Biography
The exhibition begins here, charting a course for the visitor from earliest works of drawings and prints (1976 – 2019), to larger theatrically staged works. It encourages the viewer to make imaginative, cross-continental leaps, bridging social, political, and economic systems until they are finally able to land at a personal and granular connection – a product of the catalysing force of Kentridge’s work.

The exhibition teases out the processes of drawing, print-making and animation in articulating a visual archive. Anchored by The Studio, Kentridge explores the idea of the studio as a machine for thinking where the seemingly marginal or inchoate thought is guarded. From here the exhibition unfolds outward, expanding beyond South Africa to early 20thcentury inspirations, broadening to include the failed systems and utopias of the First World War, the cultural revolution in China and Soviet Russia – troubling the reading of man as machine and their appearances of progress. In KABOOM! (2018) Kentridge (working with composers Philip Miller and Thuthuka Sibisi, and choreographer and dancer Gregory Maqoma) undertakes a forensic examination of the weighty themes of justice, truth, and beauty in relation to Africa’s involvement in the First World War.

O Sentimental Machine (2015), is a five-channel film installation that brings to life Trotsky’s belief that we are all “sentimental but programmable machines”. Originally commissioned for SALTWATER, 14th Istanbul Biennial, it was installed in one of Istanbul’s oldest hotels, the Hotel Splendid Palas. Here Kentridge explores Trotsky’s utopia of the mechanised human, we see the Trotsky phrase “Revolutionary discipline has nothing to do with blind obedience and ponder its veracity”.

In Notes Towards a Model Opera (2015), Kentridge collaborates on a film triptych with music by Philip Miller and dancer and choreographer Dada Masilo, using the form of the revolutionary operas performed in China during Mao’s Cultural Revolution to note the significance of this contemporary neo-colonial moment.

Level 1 – The Processional and the Processes of Making
The exhibition here observes the formalistic aspects of Kentridge’s creation, from drawings to processes of making across multiple media. These galleries focus on the global histories of movement, rooted in a project Kentridge created in Rome, Italy. Titled Triumphs and Laments (2016) Kentridge created a 500-metre temporary frieze on the walls of the river Tiber. This frieze depicted histories of the Roman empire, both with its triumphs and lamentations.

The images and silhouettes are duplicated and fragmented in the prints, drawings, tapestries and video installation, across the galleries in this exhibition space. Here we see the shadow figures appear torn in the Triumphs and Laments print series, always in motion in the More Sweetly Play the Dance processional, and frozen into a static image in the tapestries.

Centre for the Moving Image – Drawings for Projection (1989 – 2011)
Built out of the form of the original grain silo bins, the viewing rooms exhibit the animated film series, Drawings for Projection (1989 – 2011). This series began as a way to record the process of drawing; a desire to, as Kentridge explains, understand the drawing “not as a finished, finite fact, but as something that is provisional”.

Created across a period of immense political struggle and instability in South Africa, the series deals with the personal memory and subconscious of Kentridge, but also presents visual narratives as a collective subconscious and traumatic memory of pre and post-Apartheid South Africa. A project of collaboration, Phillip Miller composed the music for five of the films in the series of ten shown here, with other collaborators in editing from Catherine Meyburgh and Angus Gibson.

BMW Atrium – Almost Don’t Tremble
Commissioned as a site-specific installation for the exhibition, Kentridge’s recognisable megaphones surround the BMW Atrium. Through the megaphones, the musical pieces echo currents found within previous musical collaborations, built on existing lexicons of song and sound, and stretched to fill the expansive space.

The megaphone is often associated as an instrument of political propaganda. It amplifies and exaggerates sound. Kentridge makes a sculptural caricature of the instrument. Used for both revolution and order, the megaphone’s sphere references a point of origin and trajectory. The visitor can follow the sound around the BMW Atrium as the collective of megaphones plays the intimate song by each composer.

Using simple means to animate the figures and objects, Kentridge provides a glimpse into the mechanics of their making. The outline of a woman appears as a pot, secateurs move like a crab across the screen, a vintage stationery punch is ridden like a horse.

Here we see Alfred Jarry’s character Ubu, who first appeared in Kentridge’s Ubu projects (1996-7), leading a line of figures across the concrete silo wall. The soundtrack is sung by Alfred Makgalemele.

About William Kentridge
William Kentridge is internationally acclaimed for his drawings, films, theatre and opera productions. His practice is born out of a cross-fertilisation between mediums and genres, and responds to the legacies of colonialism and apartheid. His aesthetics are drawn from the medium of film’s own history, from stop-motion animation to early special effects. Kentridge’s drawing, specifically the dynamism of an erased and redrawn mark, is an integral part of his expanded animation and filmmaking practice.

Kentridge’s work has been seen in museums and galleries around the world since the 1990s, including Documenta in Kassel, the Museum of Modern Art in New York, the Albertina Museum in Vienna, Musée du Louvre in Paris, Whitechapel Gallery in London, Louisiana Museum in Copenhagen and the Reina Sofia museum in Madrid.

Opera productions include Mozart’s The Magic Flute, Shostakovch’s The Nose, and Alban Berg’s Lulu, and have been seen at opera houses including the Metropolitan Opera in New York, La Scala in Milan, English National Opera in London, Opera de Lyon, Amsterdam opera, and others. Summer 2017 saw the premiere of Kentridge’s production of Berg’s Wozzeck for the Salzburg Festival. The Head & the Load, sometimes described as a processional opera (with original music by composers Philip Miller and Thuthuka Sibisi), opened to critical acclaim in London and New York in 2018.

Kentridge is the recipient of honorary doctorates from several universities including Yale and the University of London, and in 2012 he presented the Charles Eliot Norton Lectures at Harvard University. In 2010, he received the Kyoto Prize. In 2015 he was appointed an Honorary Academician of the Royal Academy in London. In 2017, he received the Princesa de Asturias Award for the arts, and in 2018, the Antonio Feltrinelli International Prize.

Galleries are dedicated to a large cutting-edge collection; special exhibitions; and Centres for Art Education, Curatorial Training, Performative Practice, Photography and the Moving Image. Zeitz MOCAA was established through a partnership between the V&A Waterfront led by CEO David Green – acting on behalf of Growthpoint Properties Limited and the Government Employees Pension Fund (GEPF), represented by the Public Investment Corporation Limited (PIC) – and collector Jochen Zeitz. The building was reimagined through a design by the acclaimed London-based Heatherwick Studio.

+27 079 695 6201
We use cookies on our website to give you the most relevant experience by remembering your preferences and repeat visits. By clicking “Accept All”, you consent to the use of ALL the cookies. However, you may visit "Cookie Settings" to provide a controlled consent.
Cookie SettingsAccept AllRead More
Manage consent