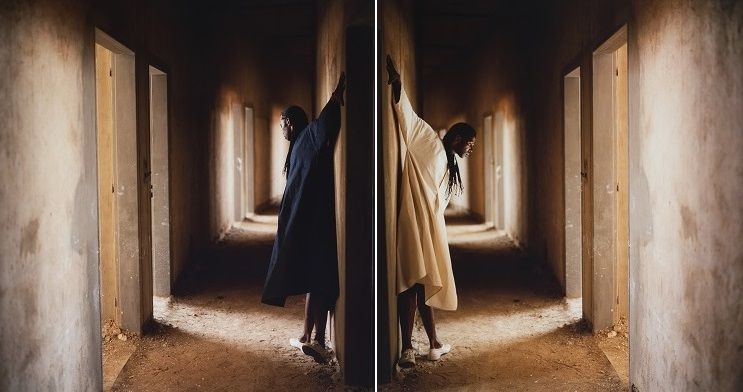 The diptych FantÃ´me CrÃ©ole Series (Papillon, No 2) is taken from Isaac Julienâ€™s film FantÃ´me Afrique (2005), a film the artist made in conversation with his earlier work True North (2004).

FantÃ´me Afrique is set in the city of Ouagadougou in Burkina Faso, a landlocked West African country and former French colony.

The setting is no coincidence as the film examines the complex relationship between Africa and its diaspora, local and global culture, and the history of imperialism and its lasting effects.

In both parts of the image, the characterâ€™s body is pressed against a wall, his arm outstretched, and his eyes fixed on the dusty ground. He is dressed in a kurta (a tunic of Indian origin), a black one in one half of the diptych, and white in the other, creating a sense of opposing forces in the individual.

In the film, Gallowayâ€™s figure dances through Ouagadougouâ€™s desert, mosques, congested street markets and dark interior spaces. These scenes are punctuated by archival footage of colonial expeditions, pop art advertising of outdoor cinemas, and the peopleâ€™s fervour during post-independence gatherings.

There is a symmetry and connection between the two sides of the figure. They are fragmented, yet complete.

This artwork is included in the exhibition Two Together.

For an even closer look at this artwork, join the discussion with Gallery Guides Michael Jacobs and Siseko Maweyi on Wednesday, 19 August at 1 p.m. Tickets are free for Zeitz MOCAA members and R30 for non-members. Click here to book.