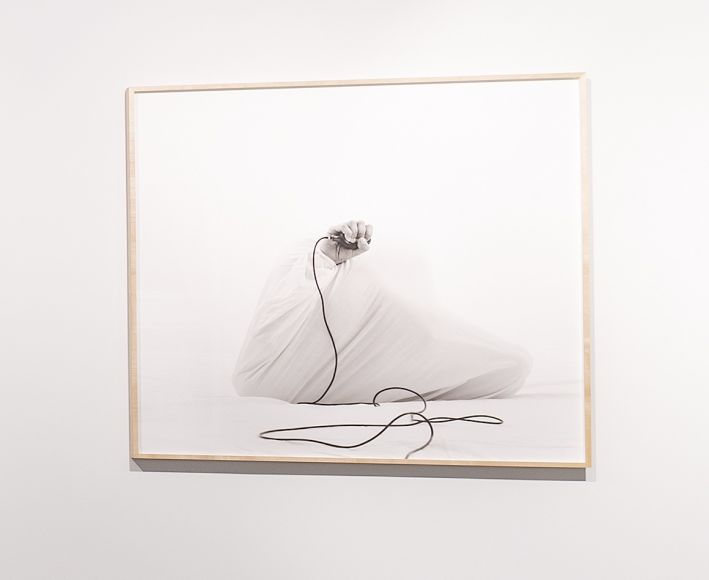 This month, we focus on Tunisian-born artist Mouna Karrayâ€™s series of photographs titled Noir (2013). In the series, we see a figure, staged in a photographic studio, constrained in a white sheet, evoking a feeling of unease.

There is a sense of restriction as the concealed form struggles for liberation while a fist appears to break through this tension. This clenched hand represents the potential power of creativity within repressed spaces.

Inside the fist, is the shutter release of a camera that looks like a grenade, a symbol often seen during protests.

The shutter release could thus be suggestive of violence, but also agency and a will toward liberation.

The shrouded figure is hidden from observation and surveillance. However, its photography, a self-captured frame, becomes the memory of its existence.

As Storm Janse Van Rensburg, Senior Curator at Zeitz MOCAA, puts it: â€œThe artist makes visible that which is invisible, that which is shrouded.â€

The Noir series can be seen in the group exhibition Two Together. Hear more of Janse Van Rensburgâ€™s thoughts about Karrayâ€™s series here.

+27 (0)87 350 4777
We use cookies on our website to give you the most relevant experience by remembering your preferences and repeat visits. By clicking “Accept All”, you consent to the use of ALL the cookies. However, you may visit "Cookie Settings" to provide a controlled consent.
Cookie SettingsAccept All
Manage consent