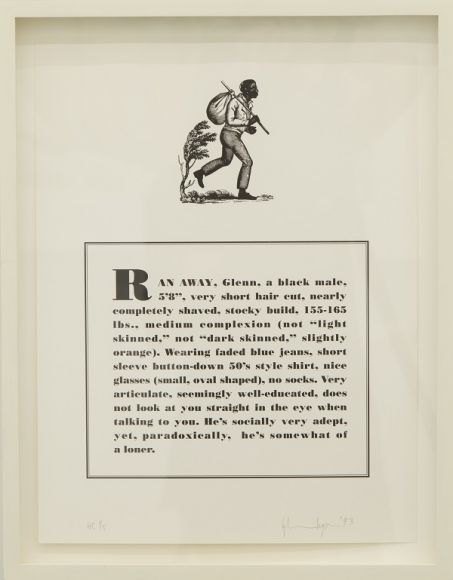 This month, we look at US-born artist Glenn Ligonâ€™s series of lithographs, Runaways (1993).

Ligon explores the history of slavery, racial stereotypes, and self-empowerment through resistance movements. He does this through the insertion of the self, through the use of specific names, personal histories and testimonies, within larger histories.

Ligon subverts nineteenth-century handbills, specifically, advertisements spurred on by the United States of Americaâ€™s federal Fugitive Slave Law of 1793. This legislation forced citizens to return escaped slaves to the state.

The texts in the Runaways series describe the appearance, mannerisms and personality of the artist. These accounts of his character given by his loved ones are presented in a manner reminiscent of a wanted poster or a missing personâ€™s report.

Runaways is a comment on the violence of racial classification still experienced today, including that of police brutality inflicted due to racial profiling.

However, Ligon resists the legacy of this history by making the character depicted in Runaways defy the attempts to reduce him to a mere commodity.

Runaways is featured in the group exhibition Two Together. Listen to the audio tour for the exhibition here.