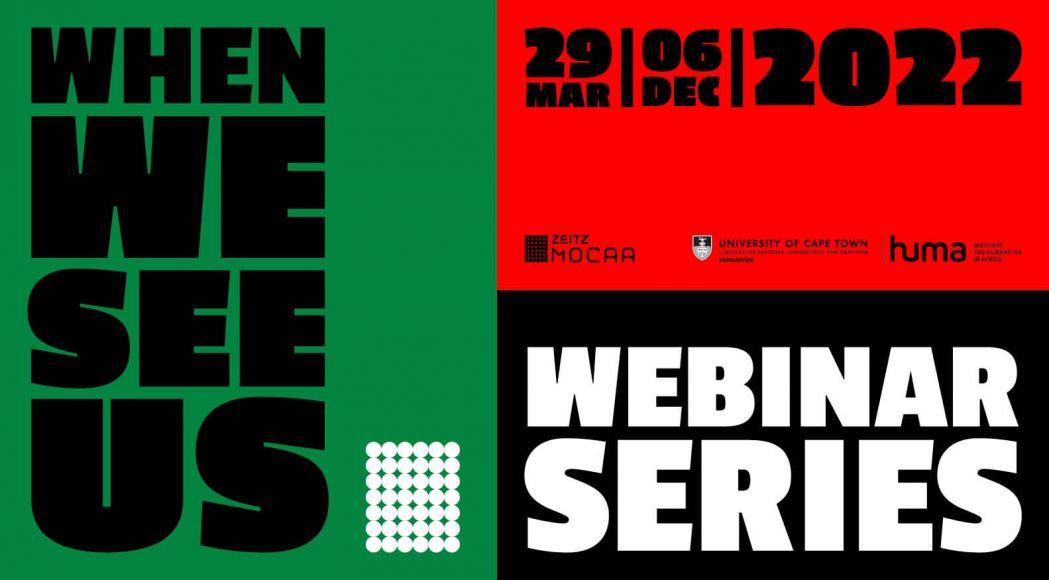 Home - Exhibitions and Events - When We See Us Webinar Series

When We See Us Webinar Series

Selected Tuesdays from 29 March through September 2023

For more than a century, Black artists, whether residing in Africa or within the vast African diaspora, have invested and pursued a spectrum of visual vocabularies that encompass the experiences of Blackness â€“ of being Black, of living within Black cultures and navigating the complexities of representation and visibility. In doing so, Black artists have intentionally, continuously and effectively rejected oppressive tropes of representation that have been cast on African and Afro-diasporic lives by the Euro-American enterprise of dehumanisation and segregation.

Conceived by Zeitz MOCAA in collaboration with the Institute for Humanities in Africa (HUMA) at the University of Cape Town (UCT), the When We See Us webinar series is a multivocal online discursive programme that precedes a major eponymous exhibition, slated to open at Zeitz MOCAA in November 2022. The exhibition, and its accompanying programming, including the webinar series, aims to unveil the deeper historic contexts and networks of complex and underrepresented artistic genealogies that stem from African and Black modernities and span several generations from the early 20th century to the present.Â

The title of the exhibition and webinar series is inspired by the 2019 American drama series, When They See Us, directed by African-American director Ava DuVernay. Flipping â€˜theyâ€™ to â€˜weâ€™ allows for a dialectical shift that recentres the conversation in a differential perspective of self-writing as theorised by Cameroonian writer, historian and political scientist Achille Mbembe.Â

Figurative painting by Black African and African-descent artists has risen to new prominence in the contemporary art field over the last decade. The webinar series aims to connect artistic practices from the early 20th century to the present day by bringing together thought leaders from the continent and its thriving diaspora to address topics around global Black subjectivity and Black representation from the premise of artistic production. The discursive programme and the exhibition are curated by Zeitz MOCAA Executive Director and Chief Curator Koyo Kouoh and Assistant Curators Tandazani Dhlakama and Thato Mogotsi.

The series is free and will take place via Zoom and runs until September 2023. No registration is required. Speakers will be announced ahead of each upcoming session.

Wednesday, 28 September 2022 â€“ A Century of Black Figuration as Representation of SelfÂ

Tuesday, 9 May 2023 – Fabulation: Navigating the tension between Image & Imaginaries