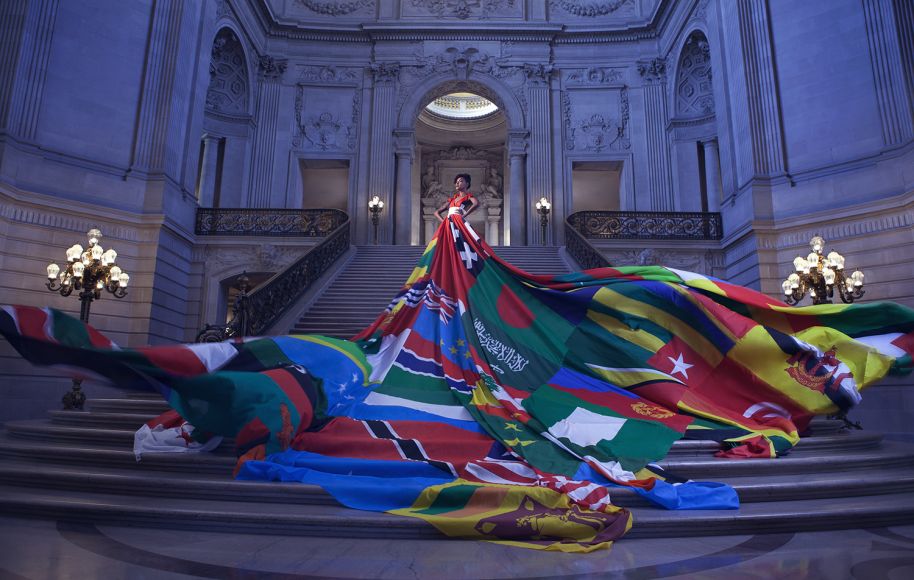 Leading up to International Human Rights Day this month and the Elimination of Violence Against Women, Zeitz MOCAA is proud to host the presentation of the Rainbow Dress installation originally from Amsterdam to honour the LGBTQI+ community’s struggles and triumphs to be acknowledged and celebrated.

The dress is made from the national flags of all these countries. It promotes awareness about this state-sponsored homo-, bi- and transphobia. Over a third of all countries in the world have this legislation, many of them in Africa.

When a country abolishes these laws, the respective flag is replaced with a rainbow flag. Hopefully, the Rainbow Dress will eventually be transformed into one big colourful garment, which represents the celebration and acceptance of gender and sexual diversity.

The Amsterdam Rainbow Dress Foundation carries out missions across the globe, presents the dress and its message, to educate, create awareness and offers a platform of support for those who are displaced because of their sexual orientation or gender identity.

Please note that RSVP is required for this event. Click here to secure your place.

About Queezy:
Queezy defines themselves as a gender non-conforming and intersex persona, able to move freely between the sexes, and a performance artist who critiques the fashion and beauty industry. Their performance seeks to deconstruct the dehumanisation and objectification of queer individuals through the embodiment of the narratives of their bodies.

About Jody Brand:
Jody Brand is a photographer born in Cape Town where she continues to live and work. She’s been the production manager for Athi-Patra Ruga Studio since 2012. Her work was selected for Simon Castets and Hans Ulrich Obrist’s project 89+ recognising young innovators, and she participated in their presentation at Design Indaba in 2014. Her most recent solo exhibition is Infinite Opulence Vol. 1 at BLANK Projects (Cape Town:2018). Group exhibitions include: Being There at Fondation Louis Vuitton (Paris: 2017); The Quiet Violence of Dreams at Stevenson Gallery (Cape Town: 2016); Making Africa at Guggenheim Bilbao (Spain: 2016) and Vitra Design Museum (Germany: 2015). She is a 2017 recipient of a Thami Mnyele Foundation residency in Amsterdam.

About Angel-Ho:
Performance artist Angel-Ho’s album Death Becomes Her is an album of emancipation and trans identity. The intent of the title and the lyrics are driven by the idea of “killing the old self, and expressing a poetic way of assuming a new identity, assuming rather than transforming because transformation feels as if something is being left behind, when in fact my identity is in assuming my trans goddess.” Death Becomes Her carves out new queer space with Angel-Ho’s take on contemporary pop through fierce and sassy musical performance.

About Lindy-Lee Prince:
Lindy-Lee Prince is a social and visual anthropologist who is in the final stages of completing their PhD at the University of Cape Town, in conjunction with the Institute for Humanities in Africa. Their previous research at the University of Stellenbosch focused on drag, gender, and situational performance, in their thesis titled: “Above gender: doing drag, performing authentically, and defying the norms of gender through performance in Cape Town”.

About Ruth Ramsden-Karelse:
Ruth Ramsden-Karelse is a PhD candidate at the University of Oxford, where she founded and now co-convenes the Oxford Queer Studies Network. The inaugural Stuart Hall Doctoral Studentship, in association with Merton College, TORCH and the Stuart Hall Foundation supports Ramsden-Karelse’s PhD research on feminine drag performance since 1950 in Western Cape communities formerly classified as ‘Coloured’. Ramsden-Karelse holds an MA in Culture and Thought After 1945 and a BA in English and Related Literature.

About Wendy LaRosa:
Wendy LaRosa is an educator and performer born in Mitchells Plain, Cape Town, 32 years ago.
She has been deeply involved in pushing for acceptance and tolerance of queer voices in the Western Cape.
Wendy also works (and plays) in drag cabaret and has performed at numerous clubs and events around the city, including Zer021 and Kat Gilardi’s Divas One Night Only.
She has won several awards, including Miss Pestova 2013, Miss Cape Town Pride 2015 and recently Miss Gay Western Cape 2018/19.