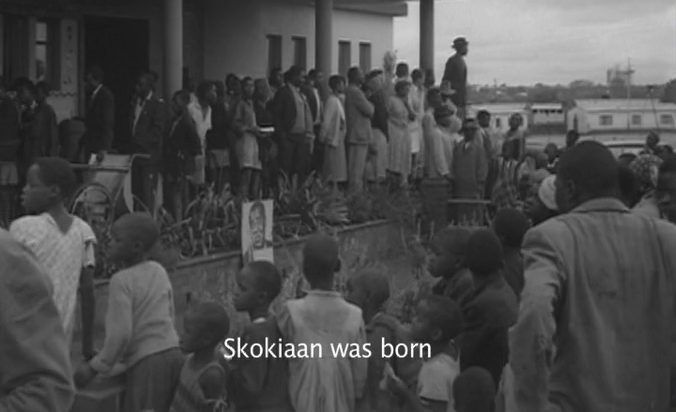 Home - Exhibitions and Events - This is a True Story: Skokiaan’s Journey

This is a True Story: Skokiaan’s Journey

Looking at the effects of migration and displacement as themes in the work of Penny Siopis’ film Welcome Visitors!, journalist Percy Mabandu will be in conversation with Jazz guitarist Reza Khota about the complex history of the song, Skokiaan. Exploring its migration from Zimbabwe, to the United States and back to the continent, music will be a tool to explore the power of song in creating impressions of a people and their way of life.

By playing the three versions of ‘Skokiaan’ in Welcome Visitors!, the panel discussion and jam session will explore the links between Southern Africa and the American South.

Following on from the discussion, as part of #FirstFriday, Zeitz MOCAA will host an evening of live jazz by the trio of Reza Khota, Brydon Bolton and Mandla Mlangeni in the BWM Atrium bowl.

This event is free with museum admission. Admission will be half-price between 4 p.m. and 9 p.m., as part of #FirstFriday. #FirstFriday opening hours: 10 a.m. – 9 p.m. Last entry at 8:30 p.m.
This event has been organised by Precious Mhone, the Torben Wind Assistant Curator for the Centre of the Moving Image (Zeitz MOCAA) and Michaela Limberis, the Wendy Fisher Assistant Curator of the Centre for the Moving Image (Zeitz MOCAA).

About Percy Mabandu:
Percy Mabandu is an award-winning journalist and author of the Yakhal’inkomo – Portrait of a Jazz Classic. The book explores the story and impact of the classic jazz album recorded and released in 1968 by Cape Town-born jazz saxophonist, Winston Mankunku Ngozi, Yakhal’inkomo.

Mabandu has written about art, jazz and the broader creative economy for publications that include City Press, Mail&Guardian, Sunday Times, Chronic Magazine, Rollingstone, Departures Magazine and many others. He is also a radio arts commentator and broadcaster for the Radio 702 Jazz programme. Mabandu sits on various boards, including the SAMRO Foundation. Mabandu is currently a reading for a Master of Arts in Fine Arts with the University of Witwatersrand.

About Reza Khota:
Reza Khota began his formal training with Jeremy Karodia at the age of ten, studying rock and classical guitar as well as chord theory. He later studied classical guitar and improvisation with Faizel Boorany, who fired his enthusiasm for experimental jazz, the classical avant-garde and progressive guitar music. After enrolling for his b.Mus degree at Wits University, he furthered his classical guitar studies under David Hewitt.

Reza has matured into a guitarist with a distinct voice and performs with a musicality and technical facility that recalls the rich history of the instrument. He is equally comfortable performing composed and improvised music.

Reza has also collaborated with people in the world of fine arts, most notably in performance pieces by William Kentridge and Nicholas Hlobo. He is a frequent collaborator in South Africa’s new Jazz scene and can be heard in bands such as: Kesivan and the Lights who played to a standing ovation at New York’s prestigious Carnegie Hall in October 2014 as well as the Shane Cooper Quintet whose album “Oscillations” received widespread praise from local and international press.

About Mandla Mlangeni:
Mandla Mlangeni is a bandleader and composer who performs regularly as a freelance musician in various capacities. As well as leading the TRC he has been active in numerous other projects in Norway, Sweden, Germany, Israel, Britain and Botswana where he performed a wide variety of music ranging from Classical, Jazz, Pop, Balkan and Indigenous African Music. He has performed with many celebrated musicians including Barney Rachabane, Marcus Wyatt, John Davies, Hugh Masekela, Sipho Hotstix Mabuse, Susana Baca (Peru), Mark Fransman, Louis Moholo, Dizu Plaatjies, Khaya Mahlangu just to name a few.

About Brydon Bolton:
Brydon Bolton started playing double bass in a small industrial coastal town called Port Elizabeth. (Along the eastern coast of South Africa). He learnt classical technique at an academy from a Yugoslavian cellist and jazz improvisation from the jazz players in the black and coloured townships surrounding Port Elizabeth.

Brydon has performed and recorded with many renowned South African musicians, such as Alex van Heerden, Derek Gripper, Robbie Jansen, Tony Cox and Frank Mallows. He is a regular performer on the Cape Town music scene with various groups, notably Benguela.

Brydon is also a music educator, sound artist, curator of music and sound events, composer of contemporary classical music, and a sound designer for dance and theatre performances. Over the years, he has collaborated with various individuals, including poets, playwrights, dancers and artists. His work focuses on developing music and sound forms that challenge idiomatic or conventional expressions.