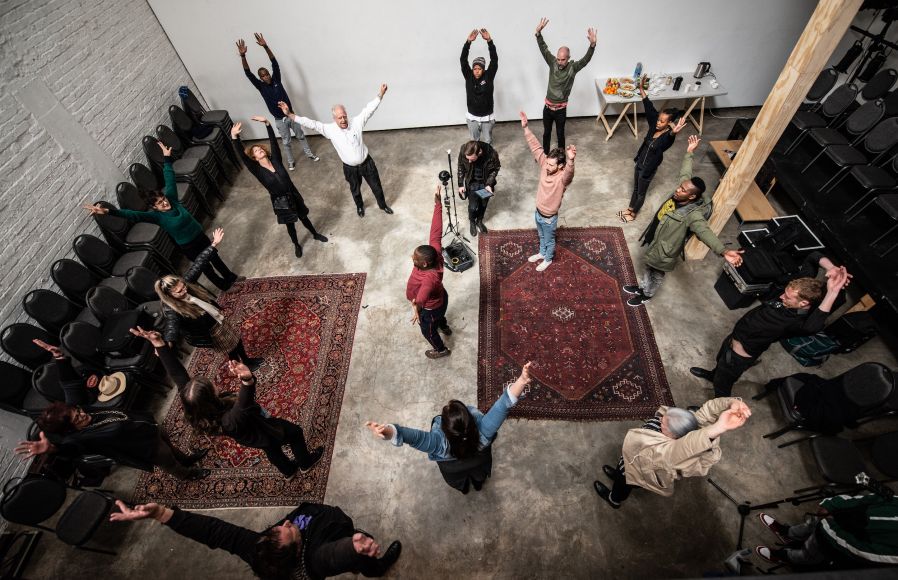 Home - Exhibitions and Events - Panel Discussion – Staging as Seeing: Theatre and performance in the Studio

Panel Discussion – Staging as Seeing: Theatre and performance in the Studio

Join us this Saturday for a discussion with The Centre for the Less Good Idea, animateur Phala O. Phala, collaborators Nhlanhla Mahlangu and Prof. Jane Taylor and the centre’s founders William Kentridge and Bronwyn Lace.

Central to Kentridge’s practice is the concern with theatrical and performative making. The Centre, a physical and immaterial space located in downtown Johannesburg exists as a studio space for incubation and collaboration where different texts, images, sound and dance come into the making process. Here formal questions are staged and filtered to provide a frame for making and seeing the world. The Centre prizes the ideas which come after the ‘good idea’, those fractured, peripheral thoughts often not pursued due to the dominance of the first good idea.

The discussion will speak to ideas of collaboration, interdisciplinary and the role of failure in the making process. This public programme forms part of the survey exhibition by William Kentridge, titled ‘Why Should I Hesitate: Putting Drawings to Work’. This exhibition is open until 23 March 2020.

This event is free with museum admission or Zeitz MOCAA Membership. Tickets available online or at the museum. Click here to purchase your membership.

Founded by William Kentridge the Centre aims to find the less good idea by creating and supporting experimental, collaborative and cross-disciplinary arts projects.

The Centre is a physical and immaterial space to pursue incidental discoveries made in the process of producing work. Often, you start with a good idea, It might seem crystal clear at first, but when you take it to the proverbial drawing board, cracks and fissures emerge in its surface, and they cannot be ignored. It is in following the secondary ideas, those less good ideas coined to address the first idea’s cracks, that the Centre nurtures, arguing that in the act of playing with an idea, you can recognise those things you didn’t know in advance but knew somewhere inside of you.

The Centre is a space to follow impulses, connections and revelations. It’s a physical space for artists to come together over two seasons every year and for curators to bring together combinations of text, performance, image and dance. The Centre believes an ensemble sees the world differently to how one individual does. It is a safe space for failure, for projects to be tried and discarded because they do not work. It’s a space for short formwork which doesn’t have a natural home in a theatre or gallery.