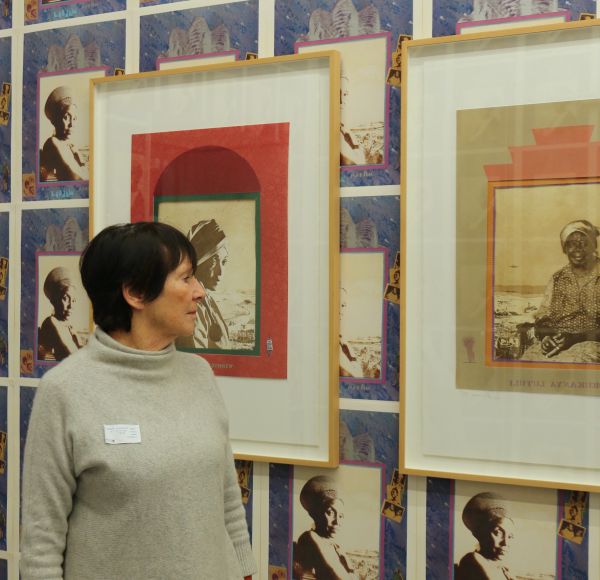 With a focus on politics, history and pertinent global issues as they relate to contemporary African sensibilities, UK-born artist Sue Williamson will be discussing her immersive installation, A Few South Africans which is part of Chapter 2 of the Afrofuturist exhibition, Still here tomorrow to high five you yesterday…

Williamson’s print series was made at a time when South Africa was still firmly under the grip of Apartheid and attempted to make visible the history of women involved in the struggle for freedom.

At that time, the faces of these women almost never appeared in the popular press, and in white South Africa, little was known about them. Meeting women such as Helen Joseph and Amina Cachalia and learning their histories was a remarkable experience for me. If I could, I took the photos of the women on which the photoetchings were based myself, but others were sourced from banned books in university libraries or other archives.

The backgrounds behind the centrally placed portraits reflect details and key events in each woman’s life. The layered silkscreened borders around the portraits add further details and also refer to the way people in the squatter camps and townships elevated family snapshots to small artworks by framing these images with coloured paper cut with zig-zag scissors.

The central image in each piece is a photo-etching with additional etching techniques like aquatints and drawing through hard ground. Some of the imagery on the frames is derived from African textiles, with additional smaller images added in. In the case of Mamphele Ramphele, the design is derived directly from fabric designs in the north of the country, where ordinary objects in bright colours printed on kanga style cloths were very popular. The close friend of Steve Biko, Dr Ramphele was banished to the north of the country, where she opened a clinic. In the Virginia Mngoma portrait, Mngoma has one such cloth tied around her shoulders.

Chapter 2 of the exhibition, Still here tomorrow to high five you yesterday… continues its exploration into notions of progress and utopia.

Sue Williamson emigrated with her family to South Africa in 1948. Trained as a printmaker, Williamson also works in installation, photography and video. In the 1970s, she started to make work which addressed social change during apartheid and by the 1980s.

Williamson is well known for her series of portraits of women involved in the country’s political struggle. A Few South Africans is one such a series where she celebrates women who had played roles in the fight for freedom.

Referring to her practice, Williamson states: “You become aware of the audience to whom you speak. In that sense, you think backwards: what you have to say, whom you say it to, and how it will reach the audience. Having to consider your work through the eyes of somebody who knows nothing about you as an artist and what you are doing is a useful exercise.” Williamson has managed to avoid the rut of being caught in an apartheid-era aesthetic, “I am never particularly interested in doing what I did the last time. I take one thing and work it out a number of ways.”

2018 saw Williamson become Goodman Gallery’s featured artist at the FNB Joburg Art Fair, where she exhibited her work Messages from the Atlantic Passage, a large-scale installation of shackled, suspended glass bottles engraved with profiles of 19th-century victims of slavery.