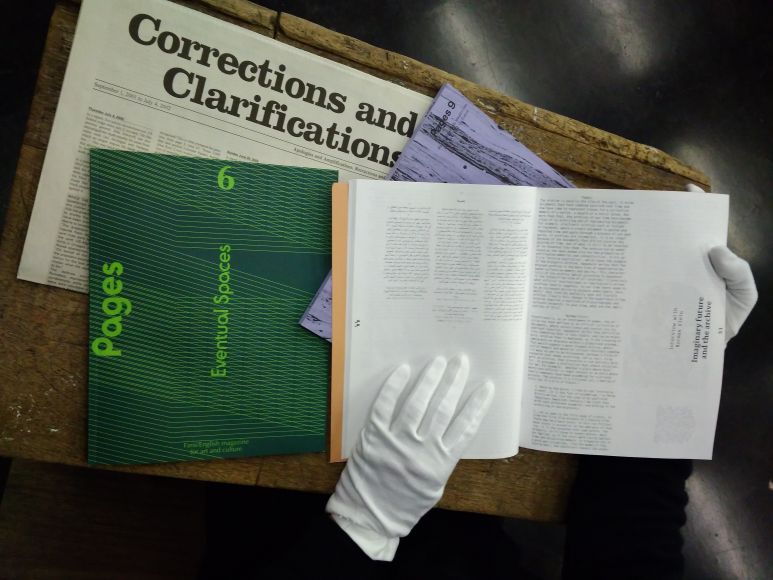 In conjunction with the exhibition of Publishing Against the Grain at Zeitz MOCAA, Alternate Voices is centred around the question of whether or not art can still rely on the archive as a historical premise.

Alternate Voices: Pages will begin with a discursive reading session within the exhibition space (Centre for Art Education, Level -1), followed by a public panel discussion at 4 PM with Pages founder Nasrin Tabatabai (via Skype), and local artists Tazneem Wentzel and Ashley Walters. This discussion will be moderated by Sven Christian, Adriane Iann Assistant Curator of Books and Works on Paper at Zeitz MOCAA.

The programme is aimed to provide visitors a frst-hand account into the origins, thought processes, and concerns behind some of the key contributions, providing a platform for these ideas to be expanded upon within the context of artistic and critical production in South Africa.

RSVP: Email sven.christian@zeitzmocaa.museum
This event can accommodate a maximum of 120 people.

About Pages:
A bilingual Farsi and English artist magazine with nine issues since its initiation, Pages is published sporadically in the Netherlands and its content – produced partly in Iran and partly in the Netherlands, and always collaboratively through long-term engagements with other contributors – always expands from the artist’s own practice. As an independent publication, it provides a platform through which interconnected topics can be explored outside the mainstream, market-oriented network of the art world. The editorial approach follows an interest in unresolved narrations of history, culture and the geo-political, and the ways they condition contemporary notions of artistic practice, with a recurring concern of the relationship between contemporary art and the archive. The economies of the new technology have resulted in the proliferation of ad-hoc archives and the question that arises is whether art can still rely on the archive as a historical premise?

About Tazneem Wentzel:
Tazneem Wentzel is currently a fellow at the Centre for Humanities Research at UWC, completing an MA in History, and a member of the Burning Museum. Her research interests focus on food as an archival repository that is practised and consumed. The archive, its ephemarality and its tangibility has a been recurring theme in the work that she has been involved in, ranging from public art to the chemical processes of conservation.

About Ashley Walters:
Ashley Walters was born in Cape Town in 1983. He completed his BAFA (2011) and a Masters in Fine Art (2013) at the University of Cape Town, where he was the recipient of a number of prestigious awards and scholarships, including the Michealis Prize (2011) and Tierney Fellowship Award (2013). Subsequent to this he completed an exchange at Hochschule für Bildende Künste Braunschweig (2013), and was awarded an Apexart Fellowship (2015) in New York. Commissioned by Magnum Foundation his work has been featured widely in publications such as Laying Foundations for Change, Rogue Urbanism: Emergent African Cities, and Aperture magazine: Platform Africa, Summer 2017 edition (#227). Walters has taken part in a number of international exhibitions in Bamako, London, Germany, New York, and exhibited his photographs widely within South Africa.Ashley Walters’ work protagonize a subjective and critical approach to the behaviours and processes of urban life in the city and its periphery. His work tells of an interest in the everyday and public space in its least predictable dimension. Waivering between absolute complicity with his subjects and distant observation, his body of work emphasizes a non-spectacular representation of reality. Whereas some images provide tableaus of intimate, inhabited spaces, others render non-territories that bespeak of up-rootedness, scarring, anxiety and liminality.