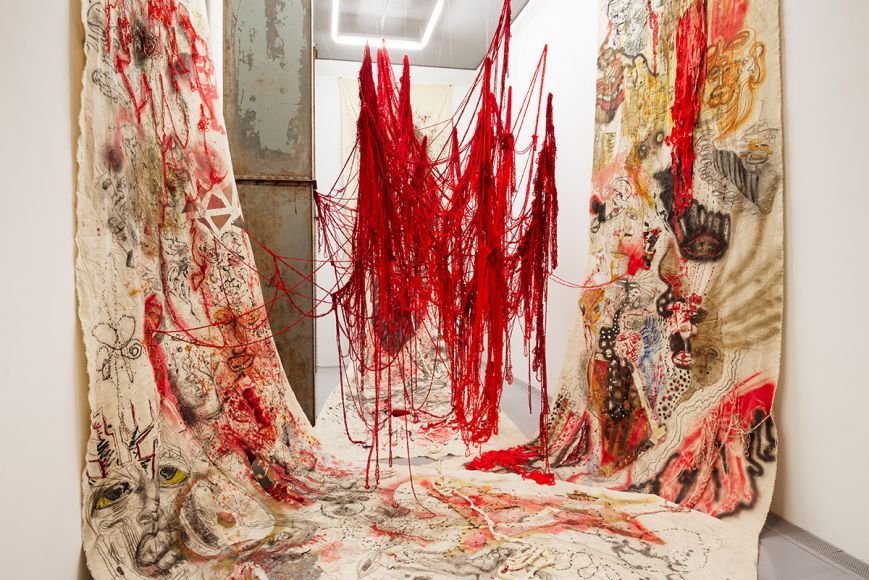 Art and Healing in a Time of Crisis

Art and Healing in a Time of Crisis is a panel discussion within the framework of the exhibition Home is Where the Art Is. It brings together practitioners from academic, scientific, indigenous, and holistic disciplines, whose practices are rooted in the symbiotic relationship between art and healing. The conversation will prompt responses to the multiple ways in which creative practices could be generative and restorative outlets and inversely, how crises impact and shape why, what and how we make art.

The panel will include participants in the exhibition Cathy Rogers, Akissi Beukman and Sarita Ranchod; curator artist and sociologist Khanyisile Mbongwa and the conversation will be moderated by Liesl Hartman, Head of the Centre for Art Education, Zeitz MOCAA.

Cathy Rogers is a psychoanalytic practitioner with more than thirty years’ experience in helping children and adults through conflicts that block living a meaningful creative life. Over the last 20 years she worked with mixed media and paint, exhibiting locally and in Switzerland. Her work is presently exhibited in Zeitz MOCAA’s Home is Where the Art Is from a study on identity titled My Name is an Incantation of Myself, in which she explores the unconscious, inherited aspects of culture via the naming of the female infant.

She converged her professional and artistic worlds through running therapeutic art groups in psychiatric treatment settings and in her work with children. She has experimented with psychoanalytic techniques such as free-association and free-floating attention to execute her paintings and to learn complex theoretical concepts.

Rogers has chaired and participated in a range of professional groups, lectured at the University of Cape Town as well as presented internationally on how artmaking can be used to learn intricate psychoanalytic ideas. Her winning paper called Art in Training will be presented at the Vancouver International Psychoanalytic Conference in 2021.

She has a masters degree in social work and is a member of the International Psychoanalytic Association.

Akissi Beukman (Zoom panelist) is an artist living and working in Pretoria and Magoebaskloof (Limpopo). She specializes in performance art, experimental sound art and painting. Her work is an ode to the subaltern’s voice. She works with colloquiality and volatility, symbolizing the silencing and warping of one’s own voice.

Her work currently centres on the expressions of personhood and the practice of art is a reflection on the state of being. She is influenced by the performativity of gender and race and the politics that surround, influence and engage with her body, as well as expressing healing with art.

Her work is part of the Sasol New Signatures 100 Collection (2017). Her work has been exhibited during the National Arts Festival (2015- 2018). Her work Speaking Sound was performed at the Arts Lounge, Makhanda as a part of Arts of Africa and the Global Souths (2018). She has also exhibited her performance installation piece MI NOUAN at Youngblood Gallery and Intimate Theatre in Cape Town (2019). She is currently exhibiting at Zeitz MOCAA in ‘Home Is Where the Art Is’.

Liesl Hartman is the Head of Education at Zeitz MOCAA.

Liesl believes that education in and through the Creative and Visual Arts is a powerful tool for positive change, healing, developing a sense of identity, and bringing a sense of enjoyment and excitement to learning. Her vision for the Zeitz MOCAA Centre for Arts Education is to provide a meaningful museum experience for all audiences no matter their age, background or expectation.

Sarita Ranchod is a feminist sculptor, writer and researcher with an abiding interest in exploring freedom’s frontiers. She articulates the Black beauty she sees through the sculptural form, particularly interested in creatively imagining herstories rendered invisible, deemed unworthy of recording, or actively silenced – such as women’s experiences of slavery at the Cape – through an appreciative Black feminist lens.

She has an embodied, visceral understanding of the transformative power of creativity for healing, having started out her sculptural journey as an attempt to reclaim her creative voice after a permanently disabling chronic pain injury that radically changed her life in a moment.

With much of her professional work focusing on violence against women and girls and persistent inequalities, her sculptural work attempts to transmute pain and violence into beauty.

Her work has been exhibited at Art in the Forest (Women in Clay Exhibition), the Hout Bay Harvest Centre gallery, and currently at the Zeitz MOCAA in Home Is Where the Art Is.

She has written on contemporary gender, race, colour and class politics for the Mail & Guardian, Huffington Post, City Press, Rhodes Journalism Review, and Feminist Africa. She has also published visual essays in the feminist journal, Agenda. Her memoir-style essay, ‘Border Crossings’, exploring her girlhood on the Cape Flats was published in a Commonwealth Writers Anthology of African Creative Non-Fiction called Safe House.

Khanyisile Mbongwa is a Cape Town based independent curator, award winning artist and sociologist who engages with her curatorial practice as Curing. Thus using the creative to instigate spaces for emancipatory practices, joy and play.

Mbongwa is the curator of Puncture Points, founding member and curator of Twenty Journey and former Executive Director of Handspring Trust Puppets. She’s one of the founding members of arts collective Gugulective, Vasiki Creative Citizens and WOC poetry collective Rioters In Session. Mbongwa was a Mellon Foundation Fellow at the Institute of Creative Arts at UCT, where she completed her Masters in Interdisciplinary Arts, Public Art and Public Sphere. She has worked locally and internationally.

In 2014 she won the Africa Centre – Artist In Residency Laureate and took up residency at JIWAR in Spain in 2015. Mbongwa was the Special Guest at Liste Art Fair Basel 2015. In 2016 she curated What Will We Tell Freedom?, a series of public interventions kwaLanga as part of Africa Centre’s Infecting The City. And her Offering piece Umnikelo Oshisiwe formed part of the 2016 Afreaka Festival in Brazil, BONE 19 Festival in Switzerland 2017 and the National Arts Festival in South Africa 2017. In 2018 she took up a curatorial research residency at CAT.Cologne, Germany focusing on the public sphere, interventions and public policies. As a result curated BLUEPRINT: Where There’s Nowhere To Go, Where Is Home?

Mbongwa has been a guest lecture at UCT (University of Cape Town), DUT (Durban University of Technology), University of Zurich, University of Basel and Rhodes University. Currently she works with Norval Foundation as Adjunct Curator for Perfomative Practices and with Cape Town Carnival as Curatorial and Socio-Critical Development advisor. Mbongwa is the Chief Curator of the Stellenbosch Triennale 2020