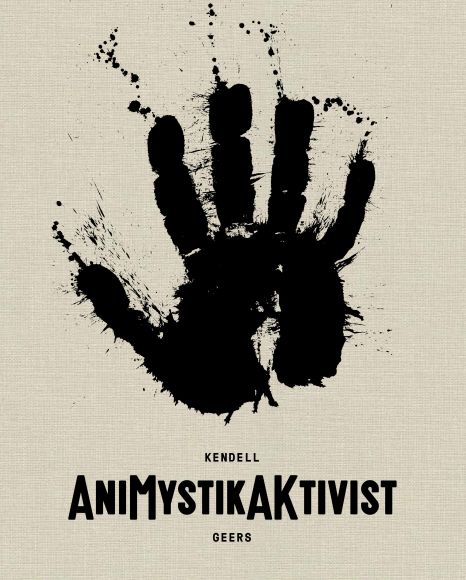 Home - Exhibitions and Events - AniMystikAKtivist: A lecture and book launch by Kendell Geers

AniMystikAKtivist: A lecture and book launch by Kendell Geers

The book AniMystikAKtivist, published by Yale University Press with texts by ZoÃ« S. Strother takes as it’s starting point the moment in 1907 when Picasso walked into the Trocadero in Paris and first encountered African Art. As a white African artist, however, Kendell Geers, considers himself to be connected to the histories of both Europe and Africa and so he puts the mask back on and looks right back at Picasso from an African perspective. The Afro-Futurist mask is held in place by a web of golden threads that resemble a border fence across a constructivist pattern. It is not clear whether the mask is looking from the Colonial past through Post Colonial present towards the viewer in an abstract future or the other way around.

AniMystikAKtivist can be read as a portrait of the artistâ€™s struggle with identity, history, faith and form through the prism of opposites shaped through the power of imagination into the fabric of art. The book looks at the work of Kendell Geers from 1988 until the present from an Afro-Centric point of view, considering the cross-influences of Avant-Garde tradition and African Art.

Born into a working-class Afrikaans family during the height of Apartheid, Kendell Geers quickly found himself fighting a Crime Against Humanity on the front lines of activism and protest. From his strong experiences as a revolutionary, he developed a psycho-social-political practice that held ethics and aesthetics to be opposite sides of the very same coin, spinning upon the tables of history. In his hands, the discourse of art history is interrogated, languages of power and ideological codes subverted, expectations smashed and belief systems transformed into aesthetic codes.

Describing himself as an AniMystikAktivist, Kendell Geers’ work embodies a syncretic approach that weaves together diverse Afro-European traditions from Animism and Activism, to Alchemy, Mysticism and Ritual Magick. His strategies are without compromise because he believes that â€œArt changes the world – one perception at a time.â€

Please note that RSVP is required for this event.