This richly detailed textile work made up of striking strips of burgundy, coral, crimson and indigo fabric, soaring four storeys high, will adorn the museum’s interior wall in the Zeitz MOCAA BMW Atrium.

The work honours two thinkers distinguished for their contribution to culture and history: Malian historian and ethnologist Youssouf Tata Cissé (1935-2013), who specialised in canonising oral history from various parts of West Africa, and Germaine Dieterlen (1903-1999), a French anthropologist who pioneered research on Dogon astronomy and the Bamana cultures of Mali. With this artwork, Konaté references ancient writing and knowledge systems, transposing it into the present.

Koyo Kouoh, Executive Director and Chief Curator at Zeitz MOCAA, states: “It is an honour to have one of our continent’s foremost artists represented in our museum and to introduce our audiences to the vitality of practices which are now part of global art history. The myriad of individually hemmed appliqued fabric fragments in Idéogrammes, signes, symboles et logos (Hommage à Youssouf Tata Cissé et Germaine Dieterlen), not only add rich colour and texture to Zeitz MOCAA’s concrete walls, but also contribute to an important dialogue around materiality in contemporary art from Africa.”

Tandazani Dhlakama, Assistant Curator at Zeitz MOCAA adds: “Konaté’s work has engaged with many socio-political and environmental issues. These range from global epidemics such as HIV/AIDS to freedom of expression, Islamic fundamentalism and political satire, to migration, music, language and spirituality.”

His work has featured in numerous international exhibitions, including group shows such as Mobile Worlds or The Museum of our Transcultural Present, Museum für Kunst und Gewerbe Hamburg, DE (2018). Recent solo exhibitions include a retrospective at Arken Museum for Moderne Kunst, DK (2016) and Symphonie en Couleurat Blain|Southern London, UK (2016).

The installation at Zeitz MOCAA will be unveiled on 12 February 2020 and will be on view for one year. This commission was made possible with the support of Blain|Southern, London. 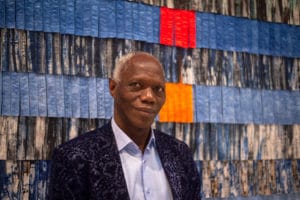 Portrait of Abdoulaye Konate. Courtesy of the artist and Blain|Southern, London. 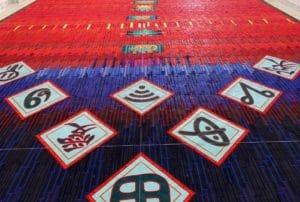 About Abdoulaye Konaté:
Work by Abdoulaye Konaté (b. 1953 Diré, Mali) primarily takes the form of textile-based installations that explore socio-political and environmental issues, as well as foregrounding his aesthetic concerns and formal language. Konaté grapples with the way in which societies and individuals, both in Mali and beyond, have been affected by factors such as war, power struggles, religion, globalisation, ecological shifts and the AIDS epidemic.

Employing material from Mali, namely woven and dyed cloths, the artist creates large-scale abstract and figurative compositions. Konaté references West-African practices of using textiles as a means of commemoration and communication, whilst balancing global political and social reflections with a reference to his own local and cultural history.

Abdoulaye Konaté was selected to participate in the 13th Havana Biennial in 2019 and previously participated in Viva Arte Viva, the central exhibition in the 2017 edition of La Biennale di Venezia, curated by Christine Macel, chief curator of the Centre Pompidou in Paris. The artist lives and works in Bamako, Mali and he is the Founding General Director of the Conservatoire des Arts et Métiers Multimédia Balla Fasseké Kouyaté in Bamako.

+27 820479015
We use cookies on our website to give you the most relevant experience by remembering your preferences and repeat visits. By clicking “Accept All”, you consent to the use of ALL the cookies. However, you may visit "Cookie Settings" to provide a controlled consent.
Cookie SettingsAccept AllRead More
Manage consent