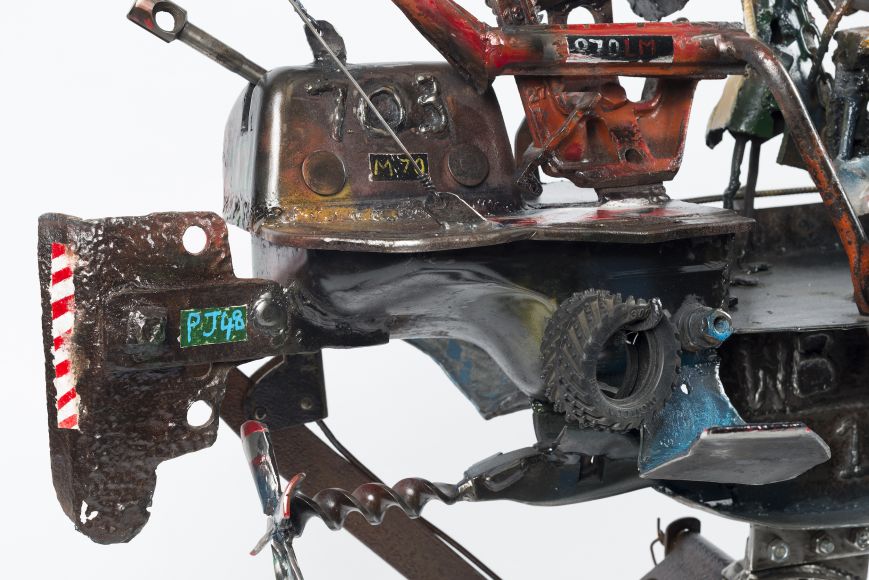 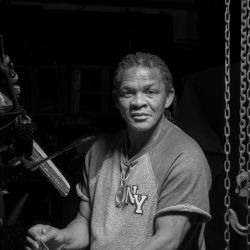 Born in the town of Montagu in the Western Cape Province in South Africa, Willie Bester grew up making art from the materials he found in his environment. “Drafted” into the Eersterivier Cadet Rehabilitation Centre for a year, like many other unemployed township and rural youth during the Apartheid era, Willie was compelled to do army-type training in a racially prejudiced environment. Fortunately, he was given some art supplies around this time and he was re-introduced to his childhood love of painting.  At the age of 26, after working as a dental technician’s assistant for many years in Cape Town, Willie finally re-immersed himself in his art and opened his first solo exhibition in 1982 which consisted of street scenes and landscapes.

Willie creates metal sculptures using found material such as old, discarded car parts, tools such as a jack and wrench that give his artwork a steampunk aesthetic.

This style of design uses a historical setting combined with anachronistic technology. The collecting practice of discarded metal waste displays his resourceful nature. His use of found objects in his art has continued to provide part of his signature style. He has now been established as one of South Africa’s most recognisable and versatile resistance artists for more than three decades.

His choices of subject matter have been inspired by the injustices of apartheid, and the disappointment and dismay he feels in response to corruption and social failures in the post‑apartheid era. His work continues to tackle the social issues he experiences in his environment, through the creation of work made from objects found in that environment.

As an artist, the environment is of paramount importance to Bester, not only in the creation of his work. He is keenly aware of the threats posed by global warming and climate change, and points to the recent drought in the Western Cape and the narrowly avoided ‘Day Zero’ water crisis as evidence of the effects of these forces on the lives of ordinary people. He underlines that as an environmental artist, he feels a particular duty to respect the environment. “Basically, I try to respect the environment, because it’s given me the space to tell my story.”

His work featured in the GrowBox Art Project exhibition (2019) was inspired by the idea of empowering a woman who survived in harsh circumstances and used that as the genesis of his GrowBox. Bester’s piece is a metal sculpture that sits above the wheels of the original GrowBox. It depicts a series of figures in chains, aboard a ship. The piece references the Atlantic Slave trade and the beginnings of colonial expansion in Africa. For Bester, the piece speaks of the link between the harsh circumstances under which people still live, and the historical conditions that sowed the seeds for economic segregation and inequality, that persist for the majority of South Africans in the post‑apartheid era. 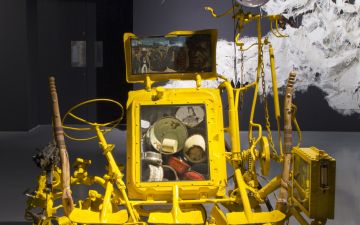